The Night With Seven Winners At Cutlass

Contests at clubs occasionally have ties. For those clubs with two sets of entry boards for two winners, one for the guys and one for the girls, ties on both for one event are rare but they do happen. But an event that had seven winners, well, that would be one for the books. Such an event happened a few nights ago on Wednesday February 3 at Club Cutlass.

This particular night was a break from Cutlass tradition. Unless there's a holiday, Wednesday contests are usually "Alphabet Nights" in which the contest is to the best in something starting with the letter (or letters) of the night. But this time the theme was "Favorites." In which people were asked to show up in their favorite avatars, which in practice meant people usually showing up in their usual ones. 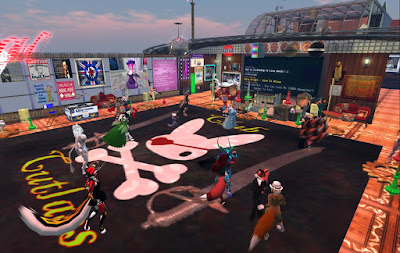 Time to fire up another party week. get on your favorite AV;s and outfits and come out to party as I play some of my favorite tunes. Doors open at 6 PM.

The event had the usual joking around and other conversation at Cutlass, mixed with a little talk about the upcoming Relay season. Eventually it was time to vote. And when the results were totaled ... 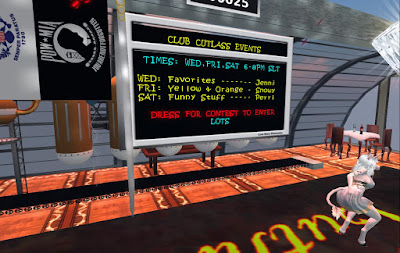 Seven winners, five for the women, two for the men. Only one other contest in memory got close to this, "There has been one other 5 way I recall, but it was a holiday party."

Jenni Greenfield, the Cutlass manager, usually puts the contest winners at the bottom of the event board. Someone commented of the five-way, "That must have stretched you out like a Thanksgiving turkey." But this time, Jenni simply entered "Lots." That got a couple snickers, "I was wondering how she would get it all to fit." Later on, Jenni would get all seven winners on by shortening the names. 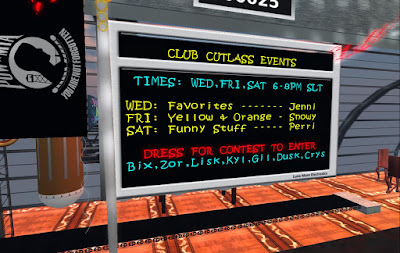 No telling how many others took a picture of the board that night. But I did, and here's my documentation of a night at my community's main club that will be remembered for some time to come.