At 7PM on April 1st, Club Gearz, which had been the main club of the steampunk-themed Steelhead community, finally reopened it's doors. It was in a new home: Port Caledon.

Club Gearz had been active every week in it's old home, up until Friday September 25 when it held it's last event in the last days of the estate's active existence. 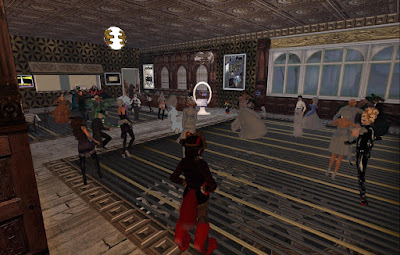 Finding it necessary to be in two places at once that night, I found it necessary to send in my trusty alt Rezzdammit, whom was officially in the Steelhead group. Due to the number of people there that night, there was a bit of lag at first. More than one person felt the club wasn't big enough. 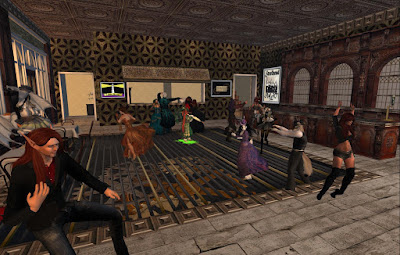 But after some moments, eventually things cleared up, and the people came into view. Also coming into view were a few old momentos of the Steelhead community, such as it's seal and a few signs.

"Club Gearz is back.. Genie's back.. And we're waiting for what the hell crazy thing Fuzz is going to do to celebrate March 32nd." 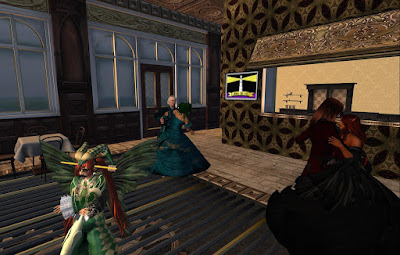 Barron Klaus Wulfenbach, and Baronin Zantabraxus, were also there for the Grand Re-Opening, as was Willow Leafstorm,whom was able to save one of the Steelhead community's sims before the rest faded away.

Willow was sporting a jesterlike outfit, with a pair of comical noseglasses and a rubber chicken, "I'm the April Fool tonight." Of the chicken, a couple people joked about referees calling a "fowl" on her. 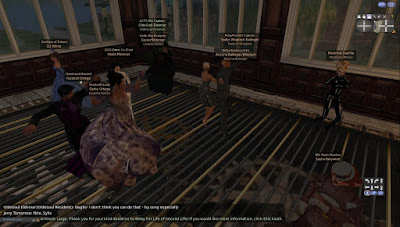 Fuzzball Ortega, seen here dancing with his partner Genie, was the DJ for the event. There were also a few Relay personalities around.

Fuzz played a number of songs, including "Mad Hatter," "Difficult For Weirdos," "Airship Pirates," "Rule the World," and Shakira's "Try Everything," of which Cynthia Farshore commented, "Wellll, seems the Sunweavers are not the only group that enjoys this one." 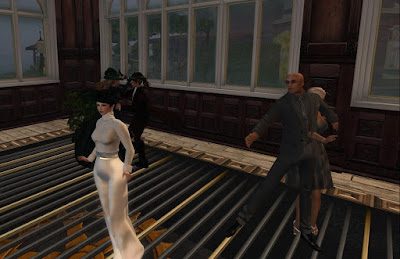 Trader Whiplash, whom recently took part in a "Bid Me Bald," sported a "chrome dome." 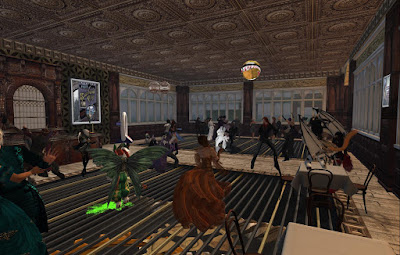 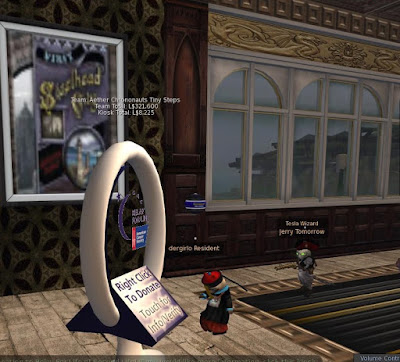 With Team Steelhead inactive this year for the Relay, there was a kiosk fot Team Aether Chrononauts Tiny Steps. At least 8200 Lindens, presumable more, was raised that night. 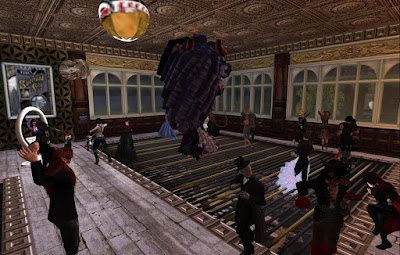 And what would a Relay event involving Fuzzball be without "The Hair?" And the people asked for it, "we were promised THE HAIR!" "Yes we were." "THE HAIR!!!" Genie wasn't so sure, "When we crash, I blame all of you." Then came a not quite human voice, "Yes, they were. Now get me out of your inventory." Then the familiar mass of head topper appeared, Fuzz saying, "I hope the Guv forgives me for crashing Port Caledon." One partier grinned, "It's overdue for a good crash." Another quipped, "The Guv understands the sign of a great party is a crash!" There were numerous cheers, "Yay!" "The Hair!" Of the height, Bain commented, "Cassie, you made the room ceiling just high enough, by inches." Madonna joked, "I imagine Cassie built the new Club Gearz with The Hair in mind." "I cannot help but notice this establishment is designed to fit THE HAIR perfectly."

First on the scene in June 2011, "The Hair" had been a fixture of numerous events involving the Steelheaders, not to mention more than a few jokes involving a certain 60s song.

A home for fleas, a nest for bees,

a nest for birds, there ain't no words,

for the beauty, the splendor, the wonder of my:

Flow it, show it, long as God can grow it, 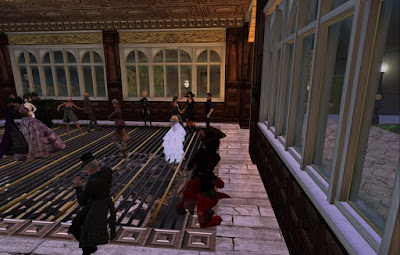 Lots of fun was held that night at the newly reopened club, the first of many in it's new home.

Posted by Bixyl Shuftan at 10:00 AM No comments: