It's almost time to say goodbye to 2016, but this isn't a formal party. Instead, dress the part of a rock n' roller. 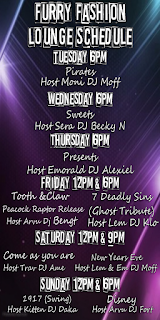 "This is my take on Christmastime. Most of the standards are low tempo and heard a million times, so I tried to choose new or seldom heard songs and keep the tempo up as much as possible. I hope this keeps you awake for your late Christmas parties!"


Thursday
6-8 pm SLT
"Nightmare Before Christmas"A mix of the Christmas and Halloween. Think vampire bats with Santa hats just waiting for someone to walk under the mistletoe.

Krampus, the demon whom European parents warn naughty kids he might come to get them, has brought a few friends and challenged some angels to a dance-off.


Monday
7pm SLT to ???
"Spinnin the best EDM tracks ever recorded. So come on down and join in the party!!!!!!! there may be a few hidden gems mixed in  the set as well but you wont know unless you are here!!!!!!!"
DJ Khyra "The Dazzlecat DJ" 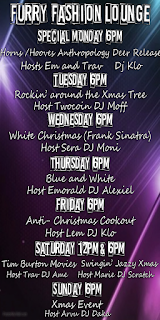 The Return of Club Culture 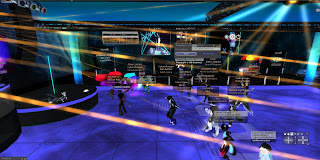 I got a surprise the other day when Outlaw Firefang (OutlawFox23 Resident) IMed me, saying Club Culture was back in Second Life. At first I was hesitant as he offered me my job back as a dj at Micha’s club. For those who don’t know about Club Culture it was Micah’s club (DjMicah resident) as he wanted to make a EDM club (EDM stands for Electronic Dance Music) He brought back his realistically designed club here at
http://maps.secondlife.com/secondlife/Alpha%20Centauri/18/201/2901

I was invited over by Tiger Ninetales who told me about a coming back party that would last for 12 hours! The first song she played was a remix of a classic rave song called meet her at the love parade written by Da Hool. She also played a remix of “Let Me Be Your Fantasy.”

I asked Micah, "Do you have any words of pride or anything to draw any avatar male or female to your club?"

Micah answered, "That Culture is proud to be one possibly the only club on the grid that has been built up, custom scripted and designed purposely to showcase the amazing DJs out there, including a line up of commercial DJs who are known across the world for festivals, clubs and radio." 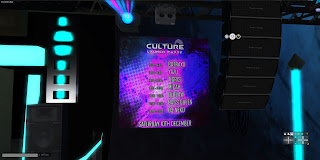 I asked, "So Culture doesn't have just desktop dj/s who use virtual dj but also dj/s who have the real world experience djing for real clubs and events?"

Micah answered, "Yep, in fact all of our DJ line up are turntable DJs, and over half of them have professional and commercial experience in the  real world. We want to deliver the best so we challenge our DJs to  be the best they can be, and encourage them to better themselves."

I commented, "If you never challenged yourself to be better you might as well not do it. For artwork writing or music."

Micah agreed, "Exactly, and one of our DJs had little experience live mixing, and always felt more safe using 'playlist djing.' But we have pushed him in to the deep end, and he's delivering great sets."

I asked, "What exactly is playlist djing?"

I commented, "I try not to do that It's much better to use virtual DJ and pick songs as I go along. Besides you might find a song combo that works much better then a generic song list that's prepped." 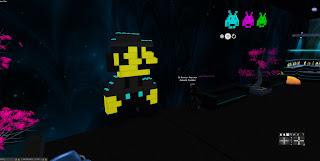 Like before, there’s artwork of dj/s and a realistic lights system. Also, there is a script meter to show who’s causing all that nasty lag while you’re trying to listen to your favorite dj. I saw a Mario in the corner. And I was surprised that some people recognized my avatar. "A male AX fox! Very rare!" "AX? Wow." Also when you use emotes on Micah’s club, you see the words on the screen but no sound. I think he wants a real life rave experience so sound emotes won’t get in the way of the music being played.

I grabbed a hold of Amy Tigris Ninetales (Tiger Ninetails) and she had this to say when I asked her what the club is looking for in hiring DJ/s, “Track selection, ability to mix said tracks and who well they can do that. Here at Culture, we strive for the closest thing to a real nightclub experience, so naturally we make sure that our DJs can deliver the quality expected at a nightclub venue."

I asked, "So it's fair to say you're fitting a whole club inside someone's computer each time you or one of your dj/s step up to mix."

She agreed, "That sounds about right, yeah."

Micah’s Club Culture is a welcome addition to Second Life’s club scene. After a hard day of work in the real world or fifty things you had to do in Second Life. Micah’s club is an excellent place to throw on your headphones to forget your worries for a while. Micah and his club have come back with a vengeance as he came back with a 12 hour party.

Grease Coakes
Posted by Bixyl Shuftan at 3:00 AM No comments:

Thursday
6-8 pm SLT
"Multiplayer Online Games" Our salute to World of Warcraft, World of Tanks, and other games online where players gather to fight together. 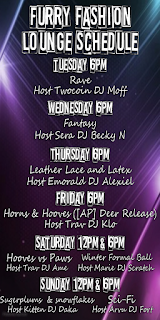 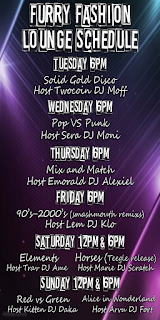 Furries are sociable, and like sharing with like-minded furries with artwork, favorite video games, writing or plain silliness. I found a great community where if you’re looking for a great place to rent to call your home which comes with a sandbox look no further then Serenity Woods. I was told about this by a friend when I was looking for a new place to dj for. 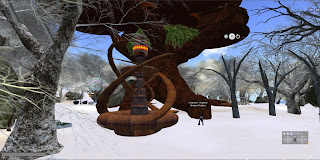 I wander around and I see creative builds like a space rocket or space needle. Also lots of trees that are leafless, probably due to the chilly weather outside. There’s also a blue and silver sandbox when you find the sim with poseballs that teleport you around the sim. Like you would right click to sit down right click away to be whisked to a part of the sim.

But there’s a catch to use sound emotes and the sandbox you have to be a member of the Serenity Woods group. You can ask any guide that is featured on the IM board to ask for a membership invite. Also you can ask for renting an apartment for their low prices. 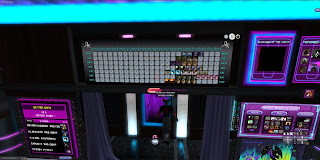 There’s also an epic club for all the furries to hang out at. Planet Serenity is well scripted and designed. And the floor has a special script that wherever you walk on the dance floor you’ll see a blue hexagon light up. The place reminds me of Buzz, later reborn as sting in Washington DC, in the real world where a honey bee with a honey comb was their logo.  (check out https://en.wikipedia.org/wiki/Buzz_(DC) also https://www.facebook.com/buzzlife/ )

Maybe you’re not in mood to be on the dance floor? There’s also a lounge upstairs to sit and chat with friends as well as a few dance poles also a bar area if you want to roleplay getting or mixing a drink for your furry friends. There’s also a theater area and I noticed a piano with a scripted spirits and cocktails display click and pick your poison and it appears in your hand.

Also the dj stage looks incredible with a blue display to show what song and artist is playing. I was told the builder is named Kelemvor Nostram and the stallion did an excellent job building the club which looks like a real life venue to dance and hang out. I also took a look at the dj board which is filled up in the night hours. So if you’re looking for a live dj best to wait until the night when people/furries  are coming home from work.

Planet serenity is looking for hosts and djs If you’re looking to share your music with furries feel free to apply. Where I have been here a short while and I have gotten a warm reception. I defiantly recommend coming to this club for a good time and/or to dj here. Also looking around the sim I saw a beautiful environment so feel free if you are looking for a place to rent the prices here are fair, Everything you could want in a sim is right here in Serenity Woods.

Grease Coakes
Posted by Bixyl Shuftan at 3:00 AM No comments: