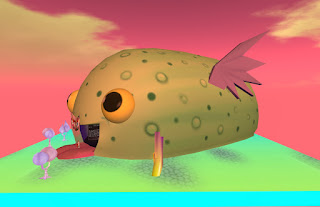 There's something about the word "pickle" that brings out a few chuckles. The "Pickle Rick" episode of the "Rick and Morty" cartoon became one of it's most popular, and something of a meme. The 1993 movie "The Pickle" used the idea of a movie about a flying giant pickle as how absurd Hollywood can be at times. Not long ago, I heard about Second Life's own giant pickle in Montecito Bay: The Flying Pickle Lounge. I recently had a few words with it's owner, Sheba Metaluna.

Sheba is a bit unique as her avatar is an anthro cicada. Of the idea for the lounge, it goes back to her school days, "the Flying pickles were created wayyy back when I was in high school. We were all at lunch one day and they gave us cups of sliced pickles.  I don't remember what was said or why, my friends' group was goofing around so, but I tossed a pickle slice at my friends lunch tray and started giggling calling it a flying pickle. And it became an inside joke among my friends and the characters evolved from there. ... the Flying Pickles are my 'sona's minions and pets." 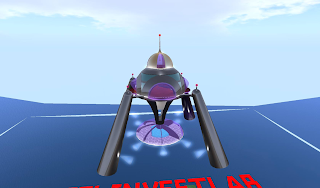 Sheeba also mentioned a pickle joke earlier in her days in Second Life, "There was a running gag with me and my neighbors back then. They had a moon above their hang out and at one point they decorated the moon as Nigel Thornberry. So I put a huge flying pickle above the club build, and we had Nigel Thornberry and the pickle staring at each other. And every so often we would move them or decorate them and wait for the other neighbor to notice." 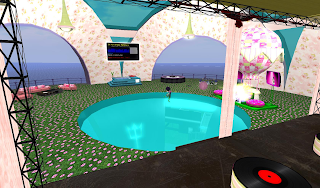 The idea of bringing one as a venue took form a few years ago, "The Flying Pickle Lounge was created shortly after quit working at Furnication because I got really sick of dealing with drama so I decided to make my own space to DJ. It just seemed natural to name it the Flying Pickle Lounge." The place has something of an unusual beginning from the template that was used for it's construction,

"The first Flying Pickle Lounge build was modded from a James Bond villain lair. ... At the time I did not know it was a James Bond themed build, I got it because it was the same build that Club Atlantian Fur had used and I deeply missed that club. ... I don't even remember who called it to my attention." 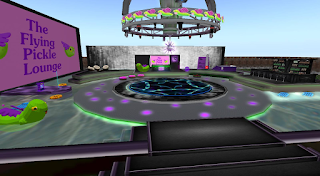 There would be two more design changes, "The second build looked far different and was an open air design It was modded from a build by Daffy." But she had to change it again, "The second version was entirely too big. The third version, and most likely the final one, is the one you see today at Montecito Bay."

The club was opened in October 2015. Naturally, there were a few chuckles over the name, "The only thing that ever really got on my nerves were people roleplaying, threatening to eat my flying pickles." Besides those trying to put the bite on her, the only other problem was having to move the place, "I moved sims a lot. Well, at least three or four times up until now."

Sheeba told me the club moved to Montecito Bay, "Shortly after Feb 14th." As it turned out, the club had narrowly escaped being in a pickle of a different kind, "It was an incredible stroke of luck because a week after I moved the pickle, the person that had been paying for the sim it was on prior, just vanished off the face of the earth. We had no notice and all tennants had about two hours to pick up everything and leave. If the Pickle had still been there I am not sure if I could have gotten everything out in time. So I am really grateful to Montecito Bay. They also allowed me to create a small garden which let me keep a few more of my Papillon breedables alive." 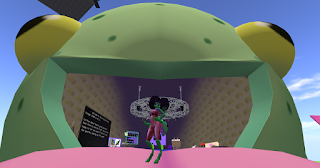 The club has been well received by the residents of Montecito Bay, "People seem to like it. I feel like it really fits with some of the EDM, Synthwave, and vaporwave that is really popular now." Surprisingly, "I have not really had that many people make jokes about the pickles, other than the whole 'Pickle Rick' thing. And that is only a recent development. We did toy with naming the staff tag for The Pickle, some pun related to brine." Hearing about the 1993 movie "The Pickle," Sheba giggled, "I need to watch that, or like find a way to have movie night in the Pickle and play that"

Of her plans, "Current plans are to party at Montecito Bay for a good long time. I don't have any events planned for it yet but I am hoping that with it being one of the venues now, it will get more use. It has been run as a fully functional club for a while. But my real-life got too busy, and I DJ too often to really focus on running a club. So it ended up being ran as a lounge, though it was always called a lounge. My biggest dreams in Second Life were to have a Flying Pickle Lounge with this specific build, as in having the lounge inside a flying pickle, and to find my favorite car in SL. A Mercedes 380 SL hard top 1983 model. And I found one that is super similar. It has no scripts but I am so happy that I can just stare at the stupid thing (grin)."

In real life, Sheba is married and makes jewelry, along with doing a little artwork, " I also list trucks, auto parts and misc items for sale on Facebook Marketplace for my Uncle's truck lot. ... Though at the moment I am also saving up for a musical instrument, a hand pan drum, hang pan, or tongue drum. That part of me wants to try playing and streaming the live tunes to Second Life."

So if you want to relax at a club that doesn't take itself too seriously, you'll relish the good times at the Flying Pickle Lounge. Just don't get pickled from too much to drink at the bar. That's when things become a big dill, "I can't believe I never thought of using the Big Dill pun."