Some clubs appear and vanish within just a few weeks. Some last for a while, but collapse when drama causes the people running it to break apart. But one has lasted for years, even when some of the people at the top passed away. This would be Eternal Desires. 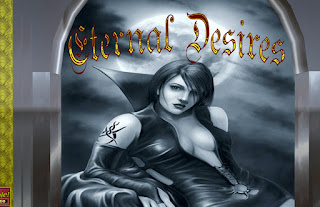 The club has events every day. The club has a mature theme, and occasionally some of the people dance in the nude. But as it is in a Moderate-rated sim, explicit activities are clearly against the rules and violations will get one asked to leave if warnings are ignored. But one shouldn't have to worry too much about the rules as the management strives to make the venue a relaxed and fun-loving atmosphere for both regulars and newcomers.

I had a few words with the owner of Eternal Desires, Blackened Merlin. When asked to describe the venue, she described it as, "It's a dance club, here for people to meet, make friends and spend some time. It's biggest claim to fame might simply be that its still here and has had an event every single night (barring LL problems) for ten years."

"The club predates me owning it," she told me, "It's 10 years old, and I started out as a customer before this sim existed and the club was on (an)other land. Before this sim, DharQ and I met a girl, the hostess, when it was on that other parcel somewhere. And we were here for opening day on this sim. ... it was owned by two other people then. ... This sim was created to hold the club shopping and residences, and at one point there were three sims. Two were homesteads, and for a while I had one to myself but I kept it open to all, tons of openspace, waterways and paths. You could reach anywhere on the three sims by boat even  (this happened after I had creative control years later)." 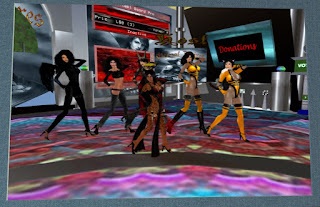 The club has not been without problems, "There were issues with the original two owners, LOTS of drama, breakups and partnering.. But after it all, I am the one still here, and a rarely seen benefactor has paid for much of the cost of the sim itself while I have paid to keep the club going. ... It's never turned a profit, and usually been a money pit, up to $100/mo sometimes. Thankfully, it's usually less, so while I dont depend on it, tips do make a big difference. Jealously was the host here since before this sim, through the breakup split (into two sims and two clubs, the other folded after a short while), she hosted, and then DharQ learned from her. And as her health failed, DharQ took over managing and hosting and I just kept the lights on.  Jealously died and we continued for years more, until last year, when my beloved DharQ's health failed,and she died too. I carry on as best I can."

The club has a number of posters on the wall, one being a rotating album showing scenes of the past. There's a "noob" dummy that doesn't react well to being touched, and a couple virtual pet cats that run around the dance floor and can be petted. And on occasion balloons drop. Somehow, Philip Linden is able to reach out from virtual space and time to spank one. Of the floor itself, sparkles rise up from it.

Once in a while, they'll bring out the swimming pool. Blackened told me, "Way back when, Jealously had a pool she would place on the roof of the rectangular building. When I made the pyramid (mod from purchased structure), I soon created the pool below along with a similar one in my home. This one is raised for a couple events, and I push the floor down, switching them back after. About every month or so it happens." She told me in the past it was raised manually, though scripts added make it an easier task now. 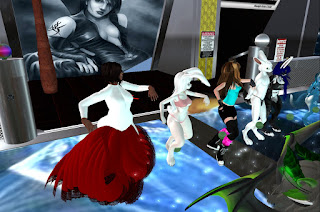 That the club is still around is good news to longtime residents coming back after a break, "There's been a good many times that people who have been away from SL for years return," Blackened explained, "and find that this place is the only LM that still takes them where they remember. That story repeats a few times a year." What also makes this location stand out is it's mixed audience of furs, humans, nekos, elves, and other demi-human avatars. While many locations welcome all, unlike most there are times no one group makes up over half the crowd. "There's nights we have far more of one than the other, but usually a nice mix and everyone gets along just fine. Some nights even a giant feral dragon will poke his head in. Or perhaps a micro. A guy that used to be a micro was here earlier, DharQ would put up a box for him to dance on so nobody would step on him."

Skylark Lefavre, whom DJs at the club sometimes, the only one outside her Sunweaver/Angels community which she plays music at, had this to say about Eternal Desires, "It is a very chillax and pleasant atmosphere to work in. The  club design is always pleasant to the eyes.I always have a good time there. People make a good club not the other way around. It does help to have a well designed club look. It is a place I enjoy working at. The sim it is on is very beautiful as well. It is one of the best places I have worked at as I have a small handful of clubs that left an impression on me, as well as good memories."

Blackened told me about a plaque outside the club. Stepping out, there were other places in the sim from swimming pools to buildings to trees. Next to one body of water, someone from the club showed me a plaque that read the following: 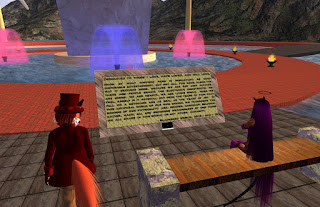 Dedicated to those I love, have loved, and will love.

Much of what happens here is irrelevant; so much disposable entertainment. But not all. For some, along the way it becomes more, because we are not just avatars. There are people behind the electronic constructs. We are minds, we are hearts, we are living souls. Here we feel, rarely is it physical. But here the tears of pain that fall on a keyboard are as real as the tears of joy. In this artificial world of our own design, we transcend the bounds of our physicality: age, gender, handicap, religion, nation, race. All are rendered meaningless by one thing we all share in this world of any other. Humanity.

Blackened stated she had no long term plans for the club other than it's continued operation and keeping it's audience happy, "No plan, just stumble forward. ... I depend upon those that love and support me to keep me going, and those that love this place for keeping it open, and all of them and strangers too, for providing a reason to do it at all."