"Sharknado" At The Happy Vixen

On Thursday June 28, the Happy Vixen had its "Sharknado" party. It was a chance for everyone at the beach club to relax in aquatic avatars, or otherwise look like they were dealing with sharks. 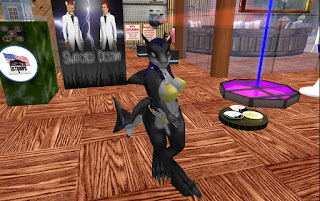 The weather forcasts calls for a freak storm at the Happy Vixen. But this isn't just any storm, it's a "Sharknado!" But don't panic *too* much as the two-legged variety came to dance, not chow down on "long pig." Dress up in a shark avatar, a raincoat, some other sea gear, have a wearable pet fish, or have a weapon handy (but on your belt or back) in case any run-of-the-mill hungry shark shows up. So come on out of the water, and be careful about what you borrow money from. "We're gonna need a bigger club"

"The Vix" has had a few Sharknado events in the past. None topped what the Steelhead community pulled off as the last event for it's Steelhead Shanghai sim as the sim was closed soon after, officially due to the place being badly damaged by the storm and the community short on funds. But no one minded as we would just invite a few land sharks over, and crack jokes. DJ Snowbuns played a mix of tunes for the party, the ominous music from "Jaws" not being on the list. "In The Navy" by the Village People was, though. 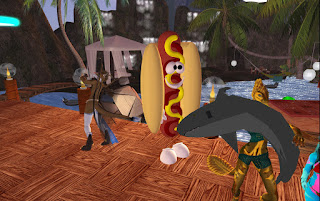 At first, this event was turning much like the previous ones, with the "we're gonna need a bigger boat" jokes and wisecracks about what was for dinner. Then a couple of the land sharks began sporting lasers on their heads. But unlike those that Dr. Evil wanted, the landwalkers were just using them to tease the furry kitties by aiming them at the floor at low power and moving them around. Then someone was wrestling a shark. Not one of the landwakers on the dance floor, but your run-of-the-mill simple-minded chomper. It seems the toothy fish was attracted by a huge hot dog on the dance floor. 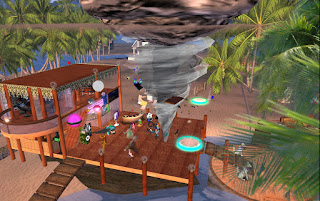 Then the wind began to pick up. It wasn't just a gentle breeze, but a strong gust. Then the people on the dance floor, furs and fins alike, saw it. It was a huge waterspout heading their way. The aquatic tornado was spinning around doors, signs, and other debris from whatever other sim it came from. At one point, it hopped onto the deck. While the boards creaked and strained, they didn't buckle or snap. This may have been in part due to the recent revarnishing the wood had. Those on the dance floor were startled, but didn't panic. 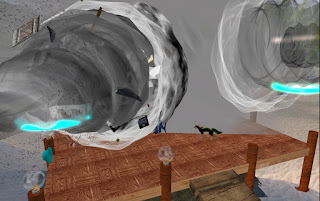 Somehow, the first twister was joined by a second one. They then turned on their sides, and it became very hard for those on the dance floor to see. But what could be seen was sharks of some kind with equipment of some kind inside both of them. Literal "sharknados." Were these two fish somehow causing the freak weather?

The wind howled, and the dancers on the deck took cover. But the twisters never bent the deck out of shape. After some minutes, both of the waterspouts faded away as quickly as they came. If there were any regular sharks left, they were scared off by a huge snow leopard that trotted up onto the deck. 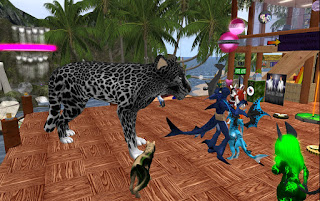 Remarkably little damage was done to the deck. Less than when a can of paint was accidentally spilled by a manager reading a group notice the other day. The contest that evening was won by Ambri Grafta.

The Happy Vixen beach club is at
Purrfection Estates (236, 219, 24) and has events several times a week. Between events, people can soak in the hot tub, play games such as "Cards Against Humanity," or have fun in the water next to the club.