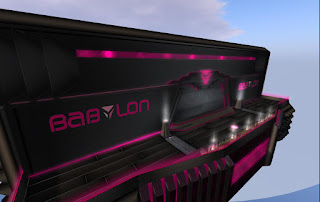 A new nightclub that is just about finished and ready for the club scene is Babylon. Owned and designed by Bastian Endless (BastianEndless Resident), the club is high above the Leah sim. I recently went by to see the place and talk to him about it.

The place had a teleport pad to and from ground level, which was where the landmark given to me led, but one could also just tp straight to the club. The exterior was a techy-looking black and maroon/dark pink. Going about the place, the floors and walls were dark, black and dark greys, with bright maroon/dark pink in places. Some of the paneling in places was a cube pattern, giving the impression of a three-dimensional surface. There were a few planters with bamboo plants, and some pink and black lounge seats one could rest on. The main dance area was roughly circular with the DJ booth opposite from the entrance. Three screens flashed shapes and lines in colors and white, the name "Babylon" in the center. Laser light projectors occasionally flashed red or white lines in the air over the dance club. Spotlights also shined light onto the floor. 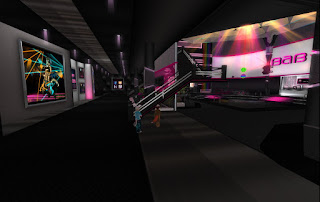 Bastian told me it took him about three months so far to design the place, and it was a little more than a month into it's construction. It had not officially opened, but he was doing a few small events for friends while finishing touches were being made, "today is to open to present club friends. ... We will try to finish it as soon as possible." When I asked him what inspired the club design, he answered, "(I) like the futuristic things. I get many ideas of science fitcion series. I also like the elegant decoration, but simple neutral colors. For example, Here I have used pink as the focal point, accompanying with colors grey and black. These colors blend very well. I also like to use the steel. The roof is something unique. I happened by chance, the color white draws attention and it bounces light bulbs. It ia a very real effect. Seems like a real life club." He added the lights were positioned in a way, "that does not bother customers." 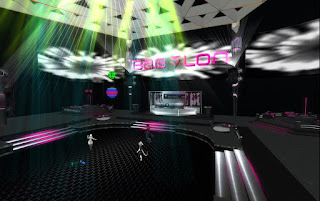 Bastian explained that as of then, he didn't have a schedule for the club yet. "I have to meet with the staff to decide a schedule." He felt most likely it would be Friday Saturday and Sunday, at least for first few weeks to months.

During our talk, a shirtless human male avatar dropped by, Erico Lecker. Bastian told me, "I present you to the constructor of the club." Erico had worked with Bastian to put his ideas into design, such as his drawings for the club's carpeted floor, "Eric works with mesh." 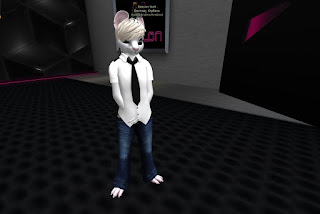 The music for the club would generally be a mix of dance, house, electro, and techno. Bastian himself was a DJ whom had performed in places such as the Happy Vixen and the Gathering Oak. Other DJs here would include DJ Kold (KoltEndless Resident), DJ Jocker, DJ Siro, and others, "We hope to have DJ Trayson, but we have not confirned this yet." He was still open to new talent coming in.

So where did the name "Babylon" come from? Bastian answered that he had been watching recordings of the gay-themed show "Queer As Folk," "This club exists in real life with the same name." This series means a lot to me ... people have very afraid to learn as it is the gay world. This series is really good. Just telling the truth, that's what I like. I love this series, bought me the collector's edition." 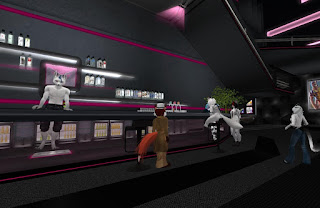 Bastian told me the official opening was Saturday June 10, "It was a success, the club was full of people."

On a final note, Bastian recently added a slide show of pictures on one section of the wall of the Rainbow Tiger club, which although a gay club was well known to furs both gay and straight, that ran for about seven years from about 2005 to 2012. It's owner, Spike Nico, had passed away early this year. The pictures were to both honor the man and the club.

Just in time for what some call Gay Pride month, Babylon promises a first class nightclub audience for it's key audience, and everyone else.