Club Carnage, owned and run by Caemlyn Witherspoon, will be celebrating their 11th year anniversary in December, nearing eight thousand VIPS!  Being around in Second Life for an 11 year milestone is certainly the mark of success, so I had to check it out and see what made Club Carnage thrive so well.

Caemlyn commented about the music, atmosphere, and events, "Basically (we stream) rock and I try not to limit what our DJs play.  I LOVE hearing songs I never heard before, that some of them come up with.  Now, if they were to start playing opera or polka music, I may have to IM them, but we are pretty open here.  We have three 2-hour themed events every day.  No one EVER has to dress in theme to be here, just if they want to join the contest for the best dressed for that event.  Along with our theme changing every two hours, the club decor also does.  You could walk in and be in a forest, and come back two hours later and be underwater.  Right now, SOR Radio, it's one of Second Life's live radio stations, is here for our event.  They come every Tuesday at 4.  We have concerts every other week, up on our concert lawn."

I rezzed into the center stage of it all, surrounded by at least fifteen other avatars, not bad for a Tuesday night.  Of course there's not only the contest board, the tip boards, request box, speakers that dancers joyfully undulated upon, and the stripper poles I enjoyed frolicking on as well... but one's camera could also be led outside the pit, by some advertisement boards lining the stage, to then the mall, filled with plentiful shops a patron could be entertained with (if, in case, the hilarious conversation wasn't stimulating enough) -anything from PlantPets to clothing and more!  The music was also very agreeable.  It wasn't too heavy, and it wasn't too light.  It was a perfect atmosphere of kismet! 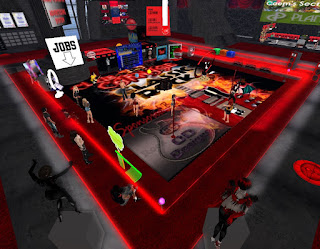 I was also offered a business card explaining about how they're hiring, which also contained an interesting and amazing notecard that offered the history of Club Carnage: Klayton Vaughan had a dream to have a safe, fun club for people to get together and dance, and listen to good music.

He founded Club Carnage in 2005.  Carnage was located on the Vail sim.  It was inside a building on the second floor, and was unique in its loo, due to its racing cars and trucks sporting the Club Carnage logo, as well as the World War Two era fighter places on display and hanging from the roof.  With a handful of dedicated people that shared his dream, Carnage slowly started to come to life. It was not uncommon for the few staff to work 12 - 14 hours a day. Events were held when the mood struck the staff - mostly in the evenings.  As Carnage gained popularity more staff were added.

After a griefer destroyed the club (back then bombs destroyed buildings), it was moved to a temporary sim until the new club could be built on Mayhem sim.  A mall was built and Carnage started to flourish.  This was the beginnings of the "Carnage Feel."

It was in place on Mayhem, when Klayton decided to sell the sim to Angela Glitter.  Angela had plans to turn the club into a popular adult club, with on site escorts and strippers.  Angela had a managing style that included firing and banning on the spot, including anyone that didn't agree with her or stood their ground against her when she was wrong.  Some of the staff stayed only because what mattered to them, wasn't who owned Carnage, but the club itself.  Two of those that were there during this time, were the current and final owners, Caemlyn Witherspoon, and Wolfbringer Sixpack.  Rose Jay was also around in those days, and remembers the history well.

The sim was unexpectedly sold by Angela.  The staff were having a farewell bash, and with no warning, no word, Angela stripped the sim to the ground, literally pulling the dance floor from under our feet.  A picture of what was left, is on the wall in the current club, "Never Forget." With no sim to have the club on, a few of the management begged, borrowed, and got enough money together to rent land on the sim, where the old Carnage had been.  The sim name was changed to Mordred.

Carnage got so popular that the sim owner started receiving complaints from others on the sim, that they could not get to their homes, that the population of Carnage kept the sim full.  Carnage was given 24 hours to leave the sim. Predicting doom, all the owners backed out, leaving Caemlyn Witherspoon in charge.  Carnage moved to Neverdie sim, joining the wonderful staff of NeverDie Club until a new home could be found.  The Club of NeverDie graciously agreed to "host" Club Carnage, in other words, allow us to use their club, and continue with our parties, thus helping NeverDie to gain traffic and popularity as well.

"It must be stated, that ND's generosity, allowed Carnage to maintain its VIP pool, and allowed us to carry on until such time as we received the new land for the current Club location.  Caem's brother - Bart Heart heard of our predicament and ordered a sim for Carnage."

With over 6000 VIPs and traffic of over 20,000 in June 2008, a staff of 100+ that is more family than staff, Carnage continues clawing it's way to the top, overcoming any obstacle Second Life sets before them.

"Everyone is equal in Club Carnage, once you enter those doors, you are a guest in our home, and we take pride in providing, the best music, the best atmosphere, good times, and good friends."

Club Carnage has thrived since Dec 2005 in a market where clubs are here today, gone tomorrow.  A committed and professional management team and staff, keep the club crowded, entertained, and returning night after night.  Guests enjoy dancing; live DJ’s, games, events, trivia, and contests during events every day.  Typically traffic is over 20,000.

CEO Caemlyn Witherspoon has been in game since Oct 2005 and is widely recognized throughout Second Life for her success with Club Carnage.

Again, thank you for your interest in our company and we hope to be seeing you soon. Either as a Carnage Employee or as a customer.

Club Carnage is still in the Destination Guide, but unbelievably with the wrong place linked!  Sadly, Caemlyn gave up trying to correct this, but I thought it was worth a mention, so as to not send you to the wrong place (the correct SLURL has been listed at the end of this article in the Additional Information section; please also note the 2nd, and last link in the URLs listed).  Better to be at least listed, and to keep the club name before the public, than not! 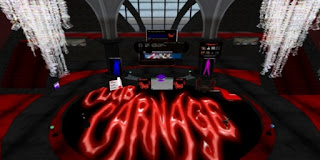 I asked Caemlyn if there was anything particular she wanted our readers to know and she replied, "We welcome all.  We don't care if you are on your first hour being in SL (we can help with questions) or if you have been here ten years.  We have had a couch, a refrigerator, and a suitcase on staff.  What you look like is up to you.  It's what you are inside that we like to get to know."  Seems very much like the right leadership attitude for such an outstanding venue.  This also coincides with my additional notes from Immortal (immortal420)'s blog (the first link in the Additional Information part of this article):

Immortal (immortal420): "Right.  Talking about staff, retention is not the easiest thing for a club owner in Second life.  What is your secret to having a loyal crew for so long?"

Caemlyn Witherspoon: "I only promote those that I feel are in it for the long haul. I have this innate ability to tell, just by interviewing someone, their intent at applying here.  We have a big turnover, as I would assume most clubs do, but our upper management rarely ever changes.  I place my trust and faith in them.  Sometimes I wonder why they stay.  I'm so glad they do though!"

Immortal (immortal420): "Okay (smile) What makes Club Carnage different from all other clubs out there in Second Life?"

Caemlyn Witherspoon: "I feel it is acceptance. We don't care if you are hours old in Second Life or if you are King of the whole world, everyone is treated equally."

It is definitely worth your time to live the Club Carnage experience.  I highly recommend checking it out, whether you're new to SL, a merchant extraordinaire, have DJ or hosting talents, or are just looking for the best time ever.  There is absolutely something for everyone here!

So party on, fellow phoenixes!

MajikVixen
Posted by Bixyl Shuftan at 3:00 AM