I didn't take any pictures at (Sunday) night's show at Xanadu, because I was too involved in it to be doing anything else but running it, but I thought I ought to write something about it, because it was actually a somewhat unusual thing to do in a Second Life club, and some people might wonder why I'd want to do it, given my known disdain for violent video games. So I imagine it probably drew more than a few double takes when I announced I was thinking of doing a Fallout event. 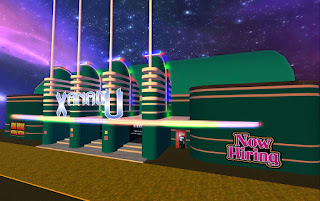 Actually, I know very little about the game, except that RECoyote was playing it in his every spare moment last year while he was staying at my house for convention season. And it was at that point that I experienced this strange sensation of playing old records, as I tend to do, and having someone exclaim excitedly, “I know that song from Fallout.”

As it happened, last week after my show at Gathering Oak, a friend stopped by and started talking about old artists she'd become interested in because of Fallout, and I pretty much spent the rest of the night playing records for her by those artists.

And I thought, this is a pretty wonderful thing, because the majority of the recordings used in Fallout come from a somewhat lost period in music history, between the Swing and Rock and Roll eras – the transitional era, you might say, which has never before experienced any kind of major revival. So previously this era was only known to aficionados of Jazz and Blues. But a lot of my favorite music comes from this era, and if it's now enjoying something of a revival because of this game, it's something I should take an interest in.

As a DJ, over the last couple of decades, I've been rather shy about playing this music publicly, because I had no reason to think anyone would know it or have any interest in it. Let's face it. It's all pretty far removed from any kind of music that's currently popular today. And the idea that I could get away with doing an entire event of this kind of music at Sunweavers didn't seem plausible. A Classic Rock show would fly. Even a 50's Rock and Roll event would be a possibility. But to reach back further than that would be getting beyond the life experience of the audience.

So, what I normally do is incorporate one or two especially interesting or funny songs from this period into a mixed program. But the idea of actually focusing on the era just didn't seem like it would be any kind of draw. But Fallout, as far as I know, is a pretty popular game that has reached a massive audience. And in doing so has rekindled interest in groups like The Ink Spots. On my most adventurous day I would never have thought of including an Ink Spots tune into one of my sets.

So I was curious to find out just what kind of impact this game is having on young people and their perception of music. Are they really hearing something in this old music they like? And, most importantly, is this altering the situation as to what is acceptable to play in public in modern times?

So I did a bit of research into just what music was in Fallout and how it was used. And it turned out, with only a few exceptions, this was music I already had in my collection. The main thing I needed to acquire was recordings of the DJ who plays the music in the game. Then I had to think of other tunes from that era that would fit into the theme of Post Apocalyptic Swing, or Violent Video Game Bop. And there were several that came to mind right away. And I was able to put this all together into an extended presentation of the “Diamond City Radio” station in the game. 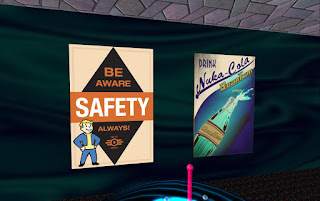 Then I needed to adjust the décor of the club, getting rid of all the Classic Rock decorations and keeping everything to that early 50's art-deco look, which my club was built in anyway. The only problem was getting the post apocalyptic feel of the game. RECoyote thought we should litter the floor with dead bodies. And if he'd wanted to take a hand in it I'd have let him do that, because he knows the game. I don't. But in the end the best I could do was throw some Fallout posters on the walls and sprinkle a layer of dirt over the dance floor.

All in all I worked harder on this experimental event than I have on any other event. And it did draw a respectable crowd, none of whom complained about the music not being up to date. Though they didn't say anything positive about it, either. I got no input at all on how effective my presentation was, at least not as far as the audio program went. Though I did get some compliments on the décor, as it is not very often a club in SL will refit it's entire décor scheme for a single event. But that is one of the things I want folks to find remarkable about Xanadu, the fact that we will go those extra 9 yards to make and event a show, rather than just an excuse to hang out.

But honestly I can understand why other clubs don't go as far as I do. It is a hell of a lot of work for very little reward. So if I was looking to be rewarded I wouldn't do it either, but as an experiment to see what flies and what doesn't, it's worth it just for the experience. 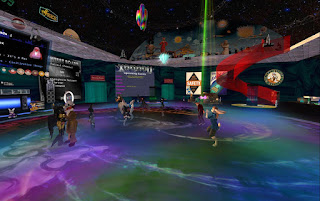 So, I guess after all that you might wonder if I learned anything from all this. And I guess what I learned is that I probably owe this video game that I don't play a good deal for my success as an SL DJ. If not for Fallout I expect I would get a lot more comments to the effect of “What the heck are you playing?”

Of course, what would really make the experience for me would be to have a lot of young people asking me about the artists and their histories. It would be great if video games were to generate a general nostalgia craze like we had in the 70's where there were always four kids in any class who could recite a Marx Brothers routine from memory. Indeed, it would be great if the Fallout series was to grow beyond the obligatory violence of a modern video game and put an even heavier focus on retro culture.

Because, let's face it, culturally, we might as well be living in a post apocalyptic world. We're just sifting around in the ruins of the good stuff that used to be, looking for pieces of something retro to make something good out of, resulting in things like Electro Swing, which I like, but not enough to get really excited about it.

There's just something vibrant and alive about the original stuff that you don't get from anything new, even when the old stuff is coming at you off a scratchy 78. Also, it has a sense of history to it. It all comes from another time that very few people are left alive to tell you about. Essentially a different world. Thus it's more fascinating to the upcoming generation, unlike to my generation who saw it as their parents' music, and therefore something to be rebelled against.

Anyway, it just pleases me no end to hear a young person say they're going to download anything they can find by the likes of Phil Harris or Danny Kaye. How long can it be before they discover what those people did in movies and radio, and they become aware of comedy that doesn't need to be shocking to be funny. If I knew stuff like that was going to happen, I'd have reason to look forward to the future.

I have to say, the event left me on a high I haven't come down off of yet, because I've always loved that music. And it was a real thrill to have an excuse to throw a spotlight on it.

Perri Prinz
Posted by Bixyl Shuftan at 3:00 AM