As I explored the new world of Second Life that a friend in a neopets guild told me about. I was going to dance clubs populated by humans not really knowing there was places for furries.
A little later when I was a month or less old in Second Life I stumbled on to a club that today still stands as Shadowquine Maltz’s Ark. I was amazed at it seeing a club that had furries only while I walked in with my now old mutant red fox. The major theme of Shadow’s Ark is adult: anything goes. Be warned readers of the Second Life Newser, The Ark is an adult club and has been for about a decade.

The graphics of the walls and floors are now more advanced from years ago when I walked in, but the premise is the same. I grabbed a chance when Shadow happened to be around and asked him about his club that just like the Ark from the Bible doesn’t seem to be sinking anytime soon. So I asked Shadowquine, who as most furries know likes to be nude as a stallion, not afraid to bare it all. I heard it from the horse’s mouth as this is his story to tell.

"Well at the beginning of it all," Shadowquine explained, "I was simply hired to build it. I started off in Second Life teaching myself how to use build tools back in '05 and started making some Linden dollars creating custom houses. The club was sort of a favor for a friend, and after the time spent making it I was in too deep to walk away from it. The Ark turned into a full on hobby for me. I think sometime late '06 I became a full owner of it and the rest is history."

I also asked Shadow, "Your club has been around forever in Second Life or any life what would you say sets your club apart from all the other furry joints in Second Life?" 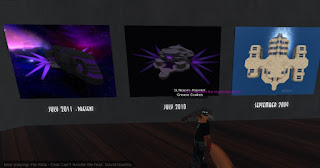 Shadowquine answered, "I guess I'd have it's the consistency between all of the changes over the years. I've always kept the same style so people know The Ark the moment the see it, even if the last time they've visited was years ago. A lot of other places change in a big way, either design or in management. Or both.

I then asked The grey stallion, "I think that's what draws in furries and a few humans. People always know what to expect here, and that your club is very adult friendly. I think the furry community likes that too. what would you say?"

"Oh, I agree," Shadowquine responded, "The obvious adult nature aside, as big in Second Life as that is, The Ark seems to be unique in that there can be a heated political discussion in the middle of strippers putting on a display. Sometimes it ends badly but more often than not The Ark fosters a peace between heated debate and heated roleplay. I'd say that's the most 'adult' you can get.
That’s for sure lately I have walked into The Ark and I’ve seen animals of both genders type roleplay into main chat on a dance pole or standing. On top of that The Ark is packed with name tags and avatars. In fact every week there’s a naked fursday so who needs clothes on that day of the week.

"In fact now I think of it, when I was a bumbling newb I ran into a name that most people may recognize as the blue vixen named Tantari Kim. She was willing to help me figure out what she took for granted that I didn’t know yet. Speaking of which, I djed for her tenth birthday here at The Ark."

My next question was, "If someone in Second Life was looking for a job for some Linden, what jobs are you looking to fill?"

"That's a pretty interesting question, actually," Shadowquine told me, "The Ark isn't a good place to work to earn Linden dollars. All of our DJs and hosts work for tips, and that is hit or miss. More often miss, depending on the crowd! Staff are drawn by the club and being a part of what we do offsets the spotty pay. People just like The Ark."

I asked, "So the ark is more like a hangout not really a money maker. But it seems like a great place to hang out in Second Life to tip a girl on a dance pole or meet new furry friends."

Shadowquine answered, "Absolutely. It's a big money drain, actually. Tier is expensive and I've never been a businessman, not here to make money. It's still a hobby to me. Really, I just know how to have fun and throw a good party. People seem to like that!"

You can’t argue with that Shadow for whatever pony magic he has seems to make The Ark the hot spot for furries who are looking for an adult club to hang out at. If you’re not afraid of adult themes feel free to stop by the main club at http://maps.secondlife.com/secondlife/Quarabia/90/128/501 or also their sandbox to unpack avatars and clothes at http://maps.secondlife.com/secondlife/Quarabia/244/46/28 where there’s also a mall that sells furry avatars and goodies.

Grease Coakes
Posted by Bixyl Shuftan at 9:00 AM