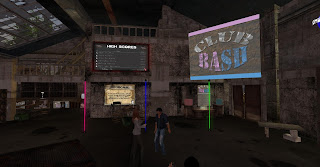 Club Bash was created by three avatars : ｲσ ץ α (mstoya.bailey), G i n a Shuffle Riddler (gina.riddler) and ⒹⒿ Ⓓⓐⓐⓝ Ⓢⓗⓤⓕⓕⓛⓔ (daan.shuffle). The name of the club comes from the owners’ last Second Life names : Bailey and Shuffle. It’s a Dutch club, but everyone is welcome there to join the fun regardless of nationality.
The club was completed in January 2016 and the opening night was on January 29th. ｲσ ץ α (mstoya.bailey) and G i n a Shuffle Riddler (gina.riddler) were the ones in charge of decorating the club. What makes the club special is the three video screens, two behind the DJ booth and one in the corner above one of the entrances. The DJ’s speaks via the stream which makes Club Bash also interactive with their visitors. Sometimes they show music videos in the club instead of just audio. I haven’t seen that in a club before, so that’s what makes the club unique. Two of their current "VJs," the DJs skilled at playing the video, are using the screens when they are playing in the club. A third DJ is getting ready to become a VJ as well. 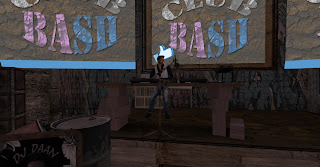 They have a Facebook page (https://www.facebook.com/Club-Bash-in-Secondlife-438175109708741/?fref=ts ). Their domain name is registered and their website is under construction. They also have a group in Second Life, and they use group notices to inform their members about upcoming events. The SL event agenda is also filled so all Residents can see that there is something to do at Club Bash.
The music played in the club can vary from : pop, (classic) rock, dance, R&B, Blues, and almost everything what is requested by the guests. As long as it fits in the "normal" standards. Song requests can be done by sending an IM to the DJ ( as it can be done in most clubs ). 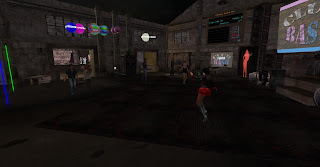 Currently there are no future events planned, but they say they can be there in  a minute. They are very flexible in that regard.
I like this club very much, because of the video screens in the club, which I haven’t seen much around Second Life venues too much.
Join the fun at http://maps.secondlife.com/secondlife/Applewood/249/10/67
I hope to see you all there and we can have fun together !
By Wesley Regenbogen
Posted by Bixyl Shuftan at 3:00 AM