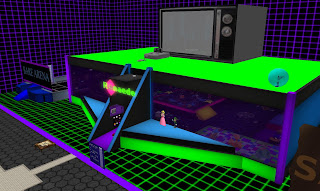 After landing on Redemption Island, while listening to the unusual, but very pleasant, choppy melodious tunes of the local radio station, it quickly became evident that this place is home to some unusual avatars. I came across a measuring post, where the average height of the last 31 users was 177cm (5 foot 10 inches). My avatar's height turned out to be 194 cm (6' 4") counting my shoes. I realized my regular avatar would not quite do here among the somewhat shorter furs, and that I might have to adapt somehow.

Thankfully there was choice galore in the shopping center nearby. There, I could easily get myself lost! It was obvious to me that there are some very creative people here doing business. You can get not just outfits and furry avatars, but also unusual oness, such as skeletons. And there are accessories such as eyes, sounds, gestures, paws. One can even get their photography done here. 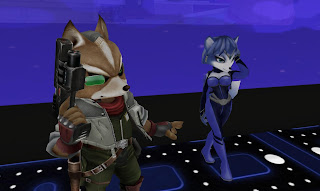 I then entered a small sandbox with dark squares with blue and green lines and then suddenly found myself in the dancing area featuring lots of statues of furry characters right by the door, Fox McCloud and Krystal from the StarFox franchise. I was later told there are also a few Pokemon around, quite in tune with the current hype!!

All of a sudden, there was Narumi, a short fur with bones all over her body, even on her wings. Yet, she was unencumbered by the weight of them, hopping lightly and elegantly from one foot to the other. We said hello. Now and then she touched and rubbed her nose assuming a graceful pose while doing so. I found myself on the dance floor, where the pentagonal tiles lit up as I walked on them forming patterns with my steps. 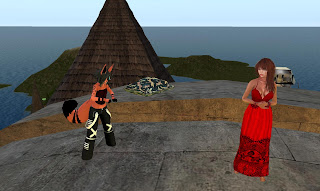 I met Lexine Caedmont Blood (LexinetheDemoncat Resident), a very friendly looking feline with childlike huge eyes. Lexine is the bartender at the Club and, as bartenders tend to do, she knows everything about the place. Of the people of the place having avatars different than normal, she paraphrased Nietsche: "The concept of 'normal' was just created by the human mind in order to cope with the indecipherable force that is nature." Very true! She indicated that cats like her are a happy bunch, but, cats will be cats! Even though they can be social, they will do as they please.

Rinaede is owned by Jaerdë Hallow (ragabash.greymoon). He would later say, "Me and my SL brother (Val Rin - Rinslet9011) both created the club together, and present each other both as owners. We originally created it as a place to hang out that was more specific to people who enjoyed games, and anime, and less on WHAT demographic it was for. So we are open for all kinds of avatars, instead of just anime, or Furry demographics. In addition to this, it was because we enjoyed the fun we got from it, and it was less we wanted to compete with other areas, and more that we wanted to create a fun LGBTQ friendly environment that was comfortable for most people to be around, as well as safe for other LGBTQ minorities." 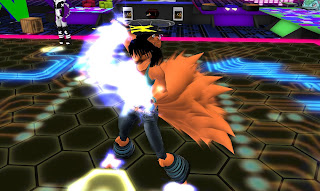 "The club was first opened last year around July, and we have moved to different locations since then, progressively moving to bigger land. We've been around for a full year now. We do rent a Full sim here, and the area we're in currently is 1/4th of the sim. the other 3/4th is our separate Roleplay sim, that is Medieval themed and influenced by favourite Fantasy RPG games, MMOs and is executed in a Dungeon and dragons-eqsue style, where we have Game masters (Dungeon Masters) and use a simple, homebrew dice rolling system. Currently it is still a work in progress, that I've been working on for a little over a month now, and is almost ready to be opened. Mostly creating history, lore and story."

So besides the club, there's a roleplay area at the sim. But that will be for another story.

Marijke Biziou
Posted by Bixyl Shuftan at 3:00 AM